Who is Muriel Strode?


The author I’m currently reading is Muriel Strode, an amazing woman — strong, gutsy, spiritual, creative, generous, intelligent, talented, and hard-working. Her writing is both down-to-earth and celestial, humble in spirit and yet fiercely, fearlessly ambitious. Her poems run the gamut from blushingly soul-sensual and nature-erotic to mystical and motivating, from poetic positive affirmations and self-discovery to some downright trippy verse.

There is very little information about Muriel on the Web, but I’ve pieced together this brief biography from a few dozen electronic and paper sources, and I’ve updated this article (January 2017) with further information from Muriel’s family for which I’m extremely grateful!

Early life & family. She was born Muriel Strode on February 16th, 1875 in Bernadotte Township, Illinois. Her grandparents were pioneers, and she spent her childhood on the farm where they originally settled. Her father William Smith Strode was a naturalist, teacher, and physician. Her mother Amelia Steele Strode died young, at age 39. A couple of years after Amelia passed away, William married Julia Yarnell Brown , a periodicals writer.

Muriel’s four siblings, all Illinois-born were: Winifred Strode Morrison , who had seven children, one of whom was named Muriel Marie. Walter Lucien Strode , a grocery salesman. John William Strode , who studied mining then moved to Arizona in 1907. After serving in the military, he served two governors as executive secretary, including Arizona’s first governor, George W. P. Hunt. Later, J. W. was editor of the Miami (Arizona) Silver Belt and president of the Arizona Democratic Association. Catherine Joane Brown Strode , half-sister, who graduated young, studied art in Chicago, and moved to California at age 19. She became an established artist using the pseudonym Joane Cromwell.

Venturing out on her own. Muriel left home at age 15 and attended a business school in Denver. At 16 she went to Long Beach, California to earn her living as a stenographer and typewritist. She began writing poetry in the midst of her business career. In 1906 she used her savings to purchase two lots in Signal Hill for $1,000 then moved to New York for a career as a writer. 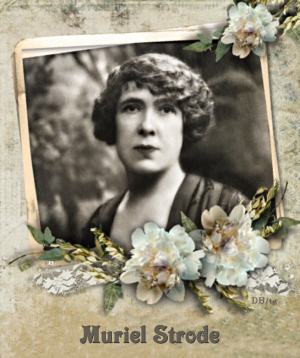 Husband & daughter. In 1908 she married Samuel David Lieberman , the president of an iron and steel firm in Chicago where Muriel had worked. His love interest in her began when he read the inspirational sayings and poems in her first publication, My Little Book of Prayer. He and Muriel had one foster child, Elinore Anne Clifford Austin , born in Colorado and taken in at three years old. The family lived in New York City for several years before moving to California in 1923, when oil was discovered on Muriel’s land and she had suddenly become rich.

Riches & philanthropy. With part of her new riches she gathered seventeen young wives and mothers, one for each year she had owned the properties, and took them on a shopping spree for beautiful gowns, hats, earrings, undergarments, and other dainty, colorful things. “I was a distributor of wings, I released them into a realization of their beauty. We are all beautiful in our elemental state. We all want to be moon moths in the glowing. But like the flowers, we need petals to show off our beauty. I want to set people free into beauty. I want to take them out of their Cinderella ashes to function as princesses,” she told reporter Ruth Snyder. “It is a poem of pain to feel the urge toward the unfolding of the wings of beauty. It is a song of ecstasy to release it. All my life I have wanted to do something big and useful and beautiful — to help others.”

Shortly thereafter in another display of generosity, she purchased a run-down waterwheel mill in her girlhood Illinois township and with her father, oversaw the restoration of it and its dam as a historic landmark, its surrounding area converted to a public park and playground. At age 80, she wrote in a letter that “I left part of my heart back in Bernadotte years ago and I have never gotten over being homesick.”

Arizona & final years. The Strode-Lieberman family moved to Arizona in 1929 due to Sam’s tuberculosis. They homesteaded 640 acres fourteen miles east of Tucson, and their home sat atop a ridge overlooking the entire Tucson valley. Muriel’s father, who was then divorced from Julia, had retired and moved in with the Liebermans. They had originally planned to build a solid rock home, every day making three-mile excursions into the desert to collect rocks. The passings of Muriel’s father and husband put a stop to the plan, however, and Muriel lived out the remainder of her days in the original wood-framed home.

In a 1955 letter Muriel wrote, “I have come a devious route to land eventually on these desert acres, as Mr. Lieberman’s business took him traveling and we lived in half the important cities in the United States.” But once in southern Arizona, that is where she stayed. She would sign her letters and books from “the Ranch of the Gorgeous Sunsets, Tucson, Arizona.” Muriel passed away on January 25th, 1964 after twelve years’ struggle with a heart ailment. 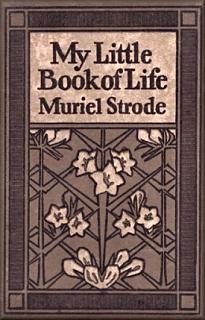 Writing & publications. Her habit was to write her thoughts and ideas every morning, and she continued to work on her writings and manuscripts even into her final years. She had first published in periodicals, mostly The Open Court. The first publication I found her cited in was The Philistine: A Periodical of Protest, from 1901. Later she authored four books:  My Little Book of Prayer, 1904, “a collection of thoughts on the spiritual side of nature, moral fortitude and other uplifting themes” (Judy Donovan); My Little Book of Life, 1912, “a personal philosophy of life that spells courage, cheer, and serenity” (The Open Court); A Soul’s Faring, 1921, “tumultuous imagery, mighty seething seas of words, of similes, of metaphors, of themes of love and life and death and the Beyond” (Brooklyn Daily Eagle); and At the Roots of Grasses, 1923, “the very rhapsody of an American soul pouring itself forth in songs of the strong” (Charles Fleischer).

In her heyday Muriel was known as “the female Walt Whitman.” She was a member of the Poetry Society of America and The League of American Pen Women. She wrote her entire career under her birth name Muriel Strode, omitting the hyphenated Lieberman on post-marriage publications. One of the books I have is signed “Muriel Strode — Mrs. Sam D. Lieberman.”

Sometimes she received harsh critiques in the newspapers. Some reviewers who did not understand her writing thought it egotistical. In 1923 she explained to a reporter, “When I say ‘I,’ I mean the cosmic ‘I,’ speaking to the cosmic ‘you.’” On reading her books, it seems clear to me that she was not egotistical but mystical. She said in a 1962 interview, “I don’t mind adverse criticism. It doesn’t matter if I’m misinterpreted because not everyone will understand what I’m trying to say.”

Those who did understand her cosmic perspective handed out more favorable reviews. “Muriel Strode has a distinctive touch in free verse rhythms. She uses them to interpret optimistically and broadly the elemental forces of being, and she strikes a high note of endeavor and faith in life without glossing over its inevitable question” (The Kansas City Times, 1921).

“Few poets are as prolific in sheer beauty as Muriel Strode. Her work is marked with richness, the forms she chooses for expression are diverse and through all her work there is the rumbling of the seeker of truth. Miss Strode’s poems are a revelation in inspiration. There seems no end to her philosophic thoughts. There is a virility of beauty in this poet’s work” (Howard Willard Cook, 1923). She “sings of the things elemental in universal nature and in human nature” (Charles Fleischer). During her girlhood in Fulton County, Illinois, she “breathed in the beauty and the intense love of nature and the elemental things of life that flame out in her poetry” (The Fulton Democrat).

Famous quote & found treasures. There were quite a few newspaper articles about Muriel during her publishing days and when she first got rich from oil, but I can’t find personal references much past her death date. Sadly, she seems to have disappeared from history, excepting her famous 1903 words “I will not follow where the path may lead, but I will go where there is no path, and I will leave a trail,” which around the 1990s had started being widely misattributed to Ralph Waldo Emerson. I am exceptionally pleased to digitally revive this wonderful poetess — I’ve been posting selected quotations from her works to The Quote Garden. Here is a sample gem: “I will have a care lest my burden rest all too long where my wings might have grown.” Strode, My Little Book of Life, 1912

Acknowledgement. I am eternally grateful to Muriel’s family for providing the information to expand this bio, as well as the beautiful photograph and retroactive permission to use her words on my website. Thank you so much!

Terri Guillemets
I love quotations, old books, nature's beauty, and my family! “Most anthologists of quotations are like those who eat cherries or oysters: first picking the best ones and winding up by eating everything.” ~Sébastien-Roch Nicolas Chamfort