Who Is Gerald Raftery?


There isn’t a bio online for author Gerald Raftery, so I’ve done lots of digging and have pieced together this brief biography from dozens of sources.

Overview.  Gerald “Jerry” Bransfield Raftery was a poet, teacher, librarian, and author. He was born October 30th 1905 in Elizabeth, New Jersey, and died in Vermont on August 26th 1986. He wrote poems, articles, books, and even a bit of music, and was known mostly for his children’s fiction and for light verse in periodicals. His books for youth were animal-themed, or academic mysteries. One reviewer called his style “warm and wryly humorous,” and a journal editor described him as having “a penchant for the controversial or the offbeat.”

Childhood & College Years.  Gerald was the son of Timothy E. Raftery and Mary C. Bransfield Raftery. His hobbies since boyhood were “tramping and camping.” He became a published poet while still in school, in various newspapers and magazines; his college annual called him a “budding poet” although still yet a “poetaster” and declared confidence in his literary fruition. At Seton Hall University (class of 1929), Gerald was on the yearbook staff, the school newspaper editorial staff, and he participated in Dramatics and the debate club. He was a graduate of not only Seton Hall but also NYU and Columbia (School of Library Service). During college he worked as a farm hand, laborer, salesman, waiter, clerk, and bank runner.

Teacher & Librarian.  Raftery began teaching in 1930 in his hometown of Elizabeth, New Jersey. His teaching career was interrupted for three years while he served as an Army intelligence specialist in Europe in World War II. He became a librarian at Lafayette Junior High School, New Jersey, in 1947. While there he helped craft a school policy for the handling of controversial issues and wrote many pieces about the life of a school librarian and his teenage students.

Vermont.  In 1966 Gerald moved with his wife Eleanor Murnin (m. 1933) to Sunderland, Vermont. He wrote a column for the Bennington Banner and was librarian at the Martha Canfield Memorial Library in Arlington, transitioning after 16 years to president of the library board. The license plate on his car read: BOOKY. Eleanor passed away two years prior to Gerald, in 1984.

Brother.  Gerald’s brother, Paul Philip Raftery (1908–2003), also wrote poetry and humor. He attended Seton Hall as well, and then law school. After working in the mayor’s office in Chicago, he retired to Vermont. He was a lifelong reader of poetry.

Family History.  “Gerald Raftery is carrying on a famous poetical tradition. His great-grand-uncle was Anthony Raftery, the blind Irish minstrel who wandered the length of Eire, singing the verses he composed. Donn Byrne immortalized the poet in his Blind Raftery” (The Irish Book Lover, 1938). “In defense of the Raftery clan I’d like to point out that Sergeant R. is not necessarily a typical representative of our group. Anthony Raftery, a Gaelic poet who flourished some 150 years ago, not only punished his fair share of poteen but was probably the only blind horse thief in the history of Ireland, and certainly the only one to celebrate his transgressions in poetry” (Gerald Raftery, in The Saturday Evening Post, 1959).

Publications & Writing.  Mr Raftery’s published books include: Gray Lance (1950, wolf), Snow Cloud (1951, horse), Copperhead Hollow (1952, youth earth science mystery), City Dog (1953), Twenty-Dollar Horse (1955), Slaver’s Gold (1966, youth cryptogram mystery), and The Natives Are Always Restless (1964, compilation of his junior high school library articles). In Twenty-Dollar Horse, Raftery addressed the issues of race relations and racial discrimination. His poems were published in New York World, Newark Evening News, The New Yorker, The New York Times, The New York Sun, Harper’s Magazine, The Forge, and several other periodicals beginning in the 1920s; unfortunately, there is no compilation. His articles appeared in The New York Herald Tribune, The Clearing House, The Wilson Library Bulletin, Library Journal, and various education journals and magazines. His column for The Bennington Banner was titled “If I May Say So.” His books didn’t always get the best reviews, and in Gerald’s own words about his poetry, “I was admittedly a third-rater, although there were some kind critics who insisted that I was really second rate” (1974).

Name.  Mr Raftery’s surname was sometimes misspelled in publications and once even by his own publisher, as Gerald Raferty. His name variations: Gerald B. Raftery, Gerald Bransfield Raftery, Jerry Raftery

One-Quote Wonder.  Raftery’s sole modern claim to fame — a quotation all over the internet “A horse loves freedom, and the weariest old work horse will roll on the ground or break into a lumbering gallop when he is turned loose into the open” — is widely posted under the Raferty misspelling.* After hours and hours of reading, I've tracked down this quotation to his novel Snow Cloud. The correct wording is “when he is turned loose in the open.” In archived items from Google Books and the Internet Archive, Raftery ceases to exist past 1964 except for one poem — “Apartment House” — which survived in some textbooks until the mid-1980s. Some of his Banner columns are referenced in newspaper archive sites up until the late 1970s or early 1980s. Unfortunately, it seems he was all but forgotten decades ago.

* I take partial blame for spread of the misspelling. I posted the horse freedom quote to The Quote Garden in 2001 copied from a book about horses in which his name was already misspelled. So I transferred the error from a secondhand print source to inadvertently facilitate its existence throughout all of eternity on the interwebs — as of the date of this blog post, only two public sites other than mine have the correct wording and name spelling, and there are 81,500 with incorrect information. I still feel bad about that old mistake; fortunately, I’ve long since changed my ways. In one of Raftery’s columns about poetry he wrote “Once a piece gets into the anthology circuit, apparently it goes on and on because anthologists just copy from other anthologies” (1974). So true. Which is, by the by, how it spread past my own site. Apologies to Mr Raftery and the world. 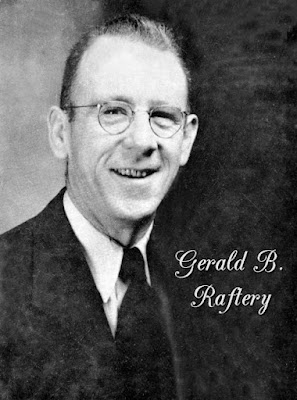 Update, April 2020:  Updated article to include Raftery’s branch of military, year of marriage, year of move to VT, license plate, place of death, and his wife’s name and year of death.

Terri Guillemets
I love quotations, old books, nature's beauty, and my family! “Most anthologists of quotations are like those who eat cherries or oysters: first picking the best ones and winding up by eating everything.” ~Sébastien-Roch Nicolas Chamfort